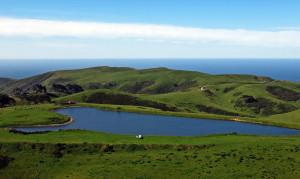 Our Supervisors and the Permit Department have proposed changes to the Coastal Agriculture elements to the Proposed Local Coastal Plan which when inserted into the General Plan will allow industrial winery/event centers in agricultural zoned areas of the Coast.

Note that these issues were previously settled and locked into the general plan during the very public campaigns to save the coast led by Bill Kortum and others beginning with the successful battles to stop the Bodega Head Nuclear Reactor and continuing for three decades, and represent the culmination of years of public involvement and the various compromises all sides had to make to establish our nationally respected General Plan. Nothing has changed since then to warrant this kind of a weakening of protections other than the fact that more outside money has moved into the area in search of profits at our expense. The majority of Sonoma county residents who do support the General Plan are not required to make further compromises than we already made. The current proposed amendments to the Local Coastal Plan is a foot in the door for an attempt to weaken the Coastal protections and subvert goals long since determined and agreed upon by the residents of Sonoma county in a long, highly visible public process that worked as designed to address the needs of all sectors.

If we lose this, we are going to be besieged for more development plans in the next few years with few tools to fight back.